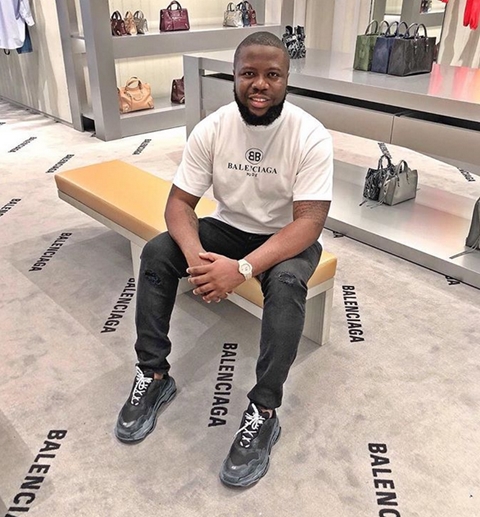 It appears Hushpuppi is back to his usual antics as he attacked popular Nigerian musicians, Phyno and KCee as well other unidentified artistes.

Popular Dubai-based Nigerian internet personality, Ray Hushpuppi, has taken to his Instagram page to rekindle his beef with popular musicians, Phyno and KCee.

The Instagram king who has in the past involved with an online scuffle with the artistes when he alleged that they wear fake jewelry, fired hot shots at the musicians in his new post.

Huspuppi who was referring to the trending issue of celebs who wear fake items, explained that a large number of people who follow him are hypocrites as he referred to attacks on him by the entertainers.

Because around 6months ago when I passed the same message about not patronizing fakes if you don’t want your own craft to be pirated too, the whole nigeria came against me, one singer with bad hair line who is a lover of patronizing fake watches, clothes n shoes even suggested I should be investigated loool.

Another one jumped in the studio to make a diss track to telli person to stop wearing gucci which is a good thing lol, another artist jumped in my dm to send me death threats in the name of cultism (which I filed a complaint to the police and some necessary ears that are good at taking revenges just incase, already) lol.

Just because I said what was obviously TRUE and now they are all silent as if they didn’t see the same topic trending , anyways fast forward to yesterday, the same message was flying around this time from a different mouth, and Nigerians be like, true talk, that’s right,

they should stop buying fakes and many support the motion and I took time to read several comments and I was amazed when I saw some popular IG figure bashing artists and was against the same thing they supporting just 6months ago, I was shaking my head.

This has rebuilt my confidence, to never mind the reaction of people either good or bad, if I know what I’m doing or saying is right, I will never be scared to pass it on, who wants to take it should take it and who doesn’t should leave it but I won’t be silent no more because of y’all hypocrisy.”